Landform recently secured consent for its Green Lane Orchard development in Norwich and the site was sold to Orbit Homes in April 2021 and will shortly be under development. 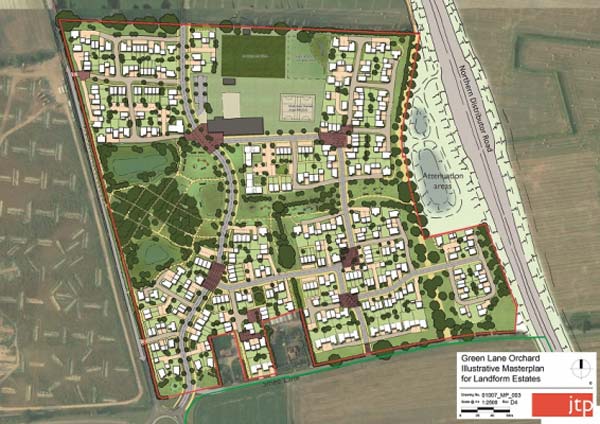 Planning consent was secured following close and productive consultation with Broadland DC, which resulted in consent being achieved through their use of officer delegated powers. The site lies the east of the cathedral city between the new Northern Distributor Road and the Broadland Business Park, adjacent to Postwick Hub and is located within the Northeast Growth Triangle, one of the fastest growth areas of the city, which is due to deliver 7,000 new homes by 2026.

The Orbit project will be one of the first housing developments to be delivered and they plan to build 272 new homes on the site as well as offering 11 self-build plots for sale. The scheme will consist of a mixed tenure development, offering opportunities for people to purchase a new home, either through open market sale or shared ownership, as well as homes for social rent.

Nearly half the site area is being set aside for extensive open spaces and landscaping, including a tree lined corridor providing pedestrian and cycle links to the city. The scheme will also include the restoration of one of the original apple orchards, which dates to the early 20th century market garden and nurseries, which used to be based on the site.

Orbit Homes will be building a range of homes from two to five bedrooms, appealing to all parts of the market from first-time properties to large family homes. Planning consent on the site includes 5 acres (2ha) of land for a two-form entry primary school, as well as other community facilities.

This is the second project that Landform and Orbit have worked on together. Two years ago, Orbit acquired from Landform the 95-acre Mickle Well Park site near Daventry, Northamptonshire, on which it is building 450 new homes and a new school.

Download a pdf for the Norwich Self-build design code